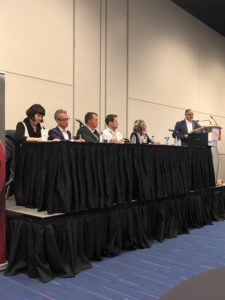 This years symposium focused on discussing Canada’s place in key wine markets.  The panel consisted of prominent wine personalities from within British Columbia markets as well the UK.  Moderated by Jon Bonné who spent nearly a decade as wine editor and chief wine critic of the San Francisco Chronicle.  He has become one of the most influential and widely-read American voices on wine.

Speaking on the export market of Canadian wine Dorozynski said that the UK is the most dynamic for Canadian wines internationally and that Canada is known for initiating tastings and inviting the UK to them, although this relationship has been building for nearly 20 years to get where it is today.

50 million liters of wine are produces yearly in Canada and of that 2 million is exported, making our export market 4%.

Canadian wine exports mainly to the US, the UK and Hong Kong.  Shanghai in China has the biggest wine consumers.  It is estimated that 40 million people in Hong Kong are consuming wine in the market there.  Hong Kong has a population of 1.4 billion people.  Chicago is the 2nd largest market or Canadian wine in the USA.

The focus is on trade and media not local industry or consumers.  Trade, media and Sommeliers have been the focus for many wineries in regards to marketing.  Canada needs to influence the influencers, if we don’t put our wine out there no one will know it exists.

Speaking on what makes Canadian wine stand out we turned to Christine Coletta of Okanagan Crush Pad located in Summerland, B.C., where she over sees the operations of their own brands Haywire, Narrative and Free Form. Her and her husband own and farm 400 aces of land in Summerland and Oliver, British Columbia.

What stands out about the wines from OK Crush pad is the fact that they do not manipulate the wine.  They allow the wine to take on it’s own personality by using Concrete Eggs and steel tank for ageing.

When asked what set the Okanagan valley apart from the rest of the world, Coletta said ‘It’s pristine and spectacular.  There’s no where else in the world where you can have snow and cactus’s in the same place’  speaking of walking through the snow covered vineyards that when uncovered reveal cactus’s that are possible to grow here due to the continental climate of the region.

When describing the wines of BC, and the Okanagan valley Christine said that they are lively, juicy, fresh fruit driven, hold a natural acidity, balanced and unmanipulated in the cellar to show the characteristics of the vineyard.

We also heard from Dr. Jamie Goode who is a UK-based wine journalist, lecturer and author.  He has been blogging about wine since 2001 at www.wineanorak.com and judges for the International Wine Challenge and the National Wine Awards of Canada.  His books include I taste red, Wine science, Authentic Wine and Flawless.  Of BC wine Dr. James said ‘They are authentic wines with a cool climate sensibility.”

Nik Darlington of Red Squirrel Wine spoke next and had many insightful things to say of Canadian wine the UK market.  His company has quickly grown to one of the leading small suppliers in the UK trade, still specializing in quirkier grapes and lesser-known or field wines.

The UK doesn’t have a strong competition locally for wine, therefore it levels the playing field for import markets.

Haywire Gamay sells well because it is fresh fruit driven and not tampered with in the wine making process.  This sells in the market there for 28 pounds ($49 cdn)

On premises sales are more popular than retail in the UK.  Millennials (people aged 23 – 38) are eating out more and staying home less.  They don’t have huge wine collections at home, but Canadian wine does appeal to them because of it’s fruit forwardness and the low level of intervention in the winery itself.

Finally we heard from Seabstien Le Goff who has built a career as a sommelier and restaurant manager in top rooms throughout Vancouver and around the world.  He has many accolades and is well respected in the restaurant world.

Originally from France Seabastien moved to Vancouver in 2003.

He sees a real synergy between wineries and restaurants in Vancouver.  He has also worked in Toronto where he says the restaurants want to be the cool kid on the block with their wine lists.  That said it is harder to get BC wine out east.

Speaking of the industry he said the Prosecco and Vino Verde are becoming more popular.

The consumer wants more fruit and less oak which we also heard from Nik Darlington about the consumers in the UK.  This makes Pinot Noir from BC very viable as it is fruit driven and due to it’s naturally thin skin there is less manipulation done in the winery after it is picked.

He said it’s hard to promote when you grow 17 wines in 10 acres.  However he did mention that he (and the general public) can pronounce all the varietals that are grown in BC.

If you can’t pronounce it you won’t order it in front of friends or business associates.  So if you want to look sophisticated learn how to say the names of the wines you love.

Pinot Gris is the biggest seller for whites from British Columbia for Le Goff.

By the glass is the most popular way to drink wine, and it is possible with BC wine to serve it that way.

Speaking of promoting wines globally Janet Dorozynski said ‘When you go out internationally you need have a focused message”  To me choosing your message is simple, decide to sell the terroir or the climate and let the wines tell the story of where they are from.

There was time left for a few questions from the audience and we had Don Triggs in the crowd who made the comment that “Good things happen because of mistakes”  and he refenced Champagne in this statement as well as Apothic wine which may or may not have been a mistake, the jury still out.

Special thanks to all our presenters, VanWineFest and Milk Creative Communications